Where Microsoft's CSP, MSP, SI, and ISV partners seek new opportunities and learn from each other

Browse the communities below to learn more about the partner ecosystem, discover new tools and resources, build relationships with other partners globaly or locally.
Reply
Topic Options

I have recently been pointed out that the MPN programs - the Action Pack in particular no longer receive Windows licenses. Confusingly they still provide the license codes but we can only use them to update previous Windows (unspecified) versions. There are 2 problems with this. Immediately after the update it becomes impossible to prove that it was an update (or reinstall on a previously licensed machine) because MPN is a digial subscription and no license stickers had been distributed. The other problem is that Action Pack subscribers must update when a new Windows version comes out. And when Windows 10 came out the update was "free" both legally and in the sense that it required no new license key.

So let's assume that you get into a SAM or some other license audit. Having no license stickers will make ALL Windows 10 computers unlicensed - unless they came with a Windows 7 or 8 COA sticker in which case they are not neeed to be covered by Action Pack ... or a Windows 10 COA sticker in which case it did not neet to be covered by any MPN or update deal.

So how can we continue using previously received Windows 7 or 8 licenses with the current Windows 10 update licenses? ... and to be honest, the License table doesn's say what can be updated to Windows 10 ... I still have my 3 Windows 2000 CD's with their unique license codes. Do those qualify? There is absolutely no information about this anywhere.

Acton pack product keys will activate full product installations. I have recently downloaded an ISO, created a Windows 10 VM and activated it with an action pack product key. I produced a video showing the process: https://youtu.be/2AHFYBuFQuo 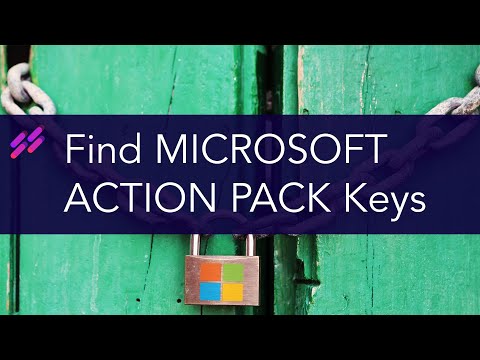 Microsoft
In response to YCD-EP

@YCD-EP  This does not change the fact that Windows 10 Licenses in Action Pack, since they follow the rules of normal Volume licensing licenses, are upgrade licenses and from licensing perspective you need an eligible base OS license to be compliant activating Win10 Enterprise from Action pack.

Note also, that in April the Win10 Enterprise Product Key-based license will be replaced by M365 E3, which is AzureAD based, it will also not work without an eligible base license anymore. By then you need a valid Win7Pro, Win8Pro, Win10Pro OEM/SystemBuilder/Retail product key n also from a technical perspective.

Level 2 Contributor
In response to JanoschUlmer

Yes, I believe you are correct. It is a crazy situation though as, like you say, there appears to be no way to audit where a Windows 10 activation originally came from. Once it's activated, it appears to be identical to any other Windows PC. ie No sticker, but a generalised activated copy of Windows. If Microsoft want us to be responisble and keep on top of this issue, then there really ought to be a way of us being able to track these things.

Afaik MPN internal use right-licenses ("IUR" - regardless if from Action pack or from competency partners on Silver/Gold) were never full licenses, always upgrade licenses which requires a base OS license, similar to how it is being done with volume licenses.

Also MPN IUR licenses never granted downgrade rights nor did they include perpetual use rights - Meaning that if you e.g. received Windows 7 with MAPS in 2010, those licenses were only valid until MAPs was renewed in e.g. 2011.

Some information on usage is still available in the usage guide - e.g., if moving the installation to another hardware or even reinstalling the SW counts as consumed license: https://assetsprod.microsoft.com/en-us/MPN-MAPS-Product-Usage-Guide.pdf (sometimes it does)

Unfortunately the MPN site at https://partner.microsoft.com/en-us/membership/internal-use-software does no longer include the more detailed documents that were available up to ~2017 which adressed some scenarios better.

During a recent conversation with MPN team I learned, that otherwise it is stated in IUR guidance, license rules follow those of VL licenses - so the Product Terms. However, for the specific questions which licenses exactly qualify this is no help - in Product Terms it is mentioned that this is different depending on licensing channel, and Partner IUR is not documented in there. So if there is no one from MPN team giving guidance here, I would advice to raise a ticket via Partner Center - they might need to escalate this internally since it was removed from website a year ago. E.g. Windows 2000 Pro is really eligible for certain EA customers, for CSP it is only the Pro editions of Win7, Win8 and Win10. Since inplace-upgrades technically only work from Win7 or newer I'm pretty sure that Win7 is considered to be an eligible license for the upgrade - but the MPN team needs to confirm. I'm also pretty sure the keys work on a new install of Windows 10 when using the media from Media Creation toolkit at https://www.microsoft.com/en-gb/software-download/windows10

Reg. the other issue - the license audio scenario you mentioned.

It is true that for an audit you should be having proof that you own base OS license (e.g. OEM license) which will come with COA label, or alternatively a retail license where you have the package with COA.

Since without this OEM license, the Action pack license is no use - the fact that you could install full Windows from MAPS on bare metal in former times did not change the fact that you need a qualifying OS licenses assigned to the device - also similar to how it is been done for VL license customers which also only do get upgrade licenses where the media does allow full install.

Reg. the Windows 10 Pro license it is a bit more tricky, since indeed only the availaility of a "Digital license" in Windows' activation info is the proof that there is an active license - e.g. customer that upgraded from Windows 7 to 10 during free upgrade period in 2015/2016 will only have this (+ the info/proof on the qualifying OS license that came via OEM or retail). Customers using upgrade benefits within CSP program also only have this after CSP subscription for E3/E5 has ended - since they are also allowed to keep Windows 10 Pro, even the installation & activation method is done similar to how it has been done during the free upgrade. In fact, an auditor is not able to differentiate if an upgrade to Windows 10 was made during the free upgrade period or later, and I have received feedback from some SAM Partner that this is a bit of a problem.